I think that everybody got the message. A at this point, the combination of crypto-currencies and low inflation is probably the worst enemies for GOLD (now at 1275).

Hence, it's probably a good time for some trades to the South side as Gold might target the 1200 level in the short term (see the monthly chart).

Furthermore, the XAUUSD might not be able to find a serious support before hitting the area 1155-1130 (see the weekly chart).

I must admit that the identification of the Elliott Waves posed some challenges. Initially, the monthly chart displayed essentially the following waves:


That looked very much as a case study and I honestly thought that, at 1046,  the downtrend was over.

Instead, I overlooked  an important detail: the candlestick pattern at 1046 (see the low at 55C) was a clear warning that the incoming uptrend was going to be only temporary.

Conclusion: even if a rebound to 1281-90 is still possible, Gold should resume the downtrend to the 1200 area. 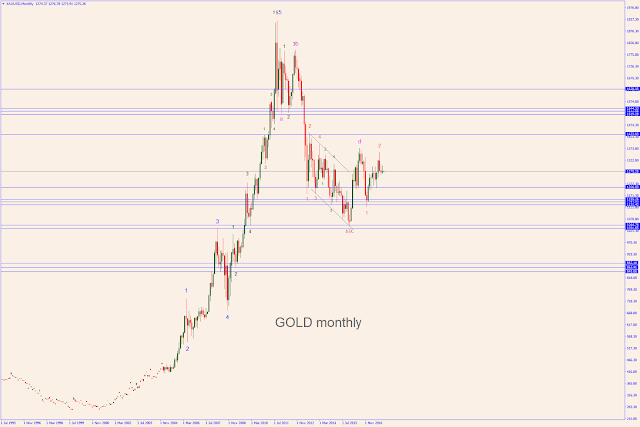 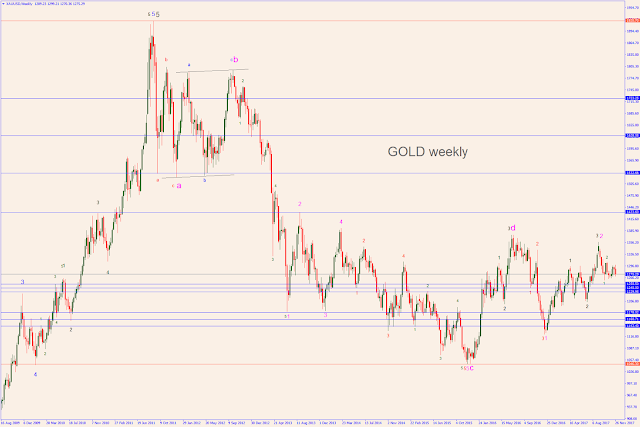 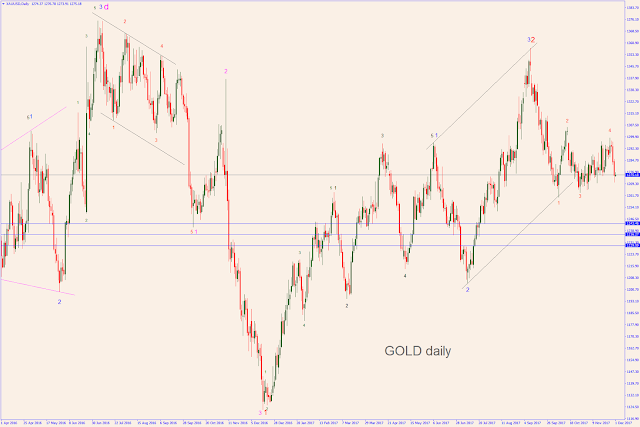 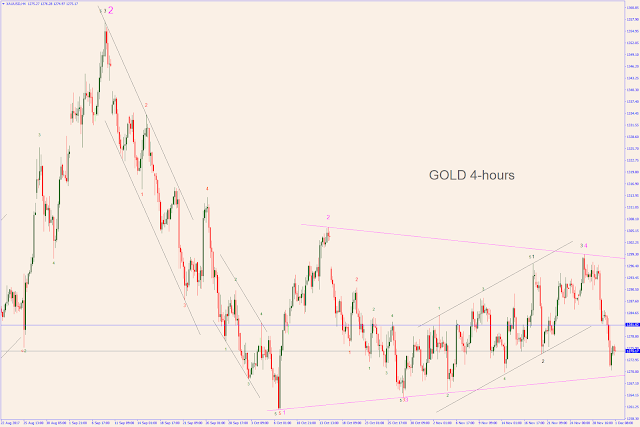 Posted by Mario D. Conti at 17:40 No comments:
Email ThisBlogThis!Share to TwitterShare to FacebookShare to Pinterest

The Euro next move

The monthly chart and the weekly chart reveal that the Euro might have  entered a pattern that could last years in the making. If this is the case, the present wave configuration is the typical wave 4 of a downtrend which is made of:
At present, the Euro seems to be running wave b down to 1.08.

The daily chart and the 4-hours chart show a small downtrend made of five waves, four of which are fully deployed already. The fifth wave down just started unfolding. 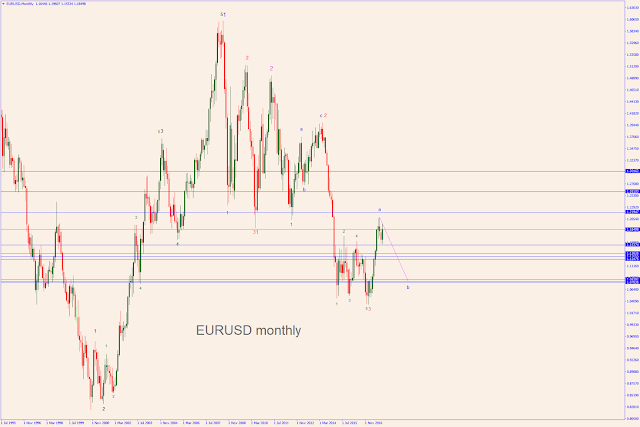 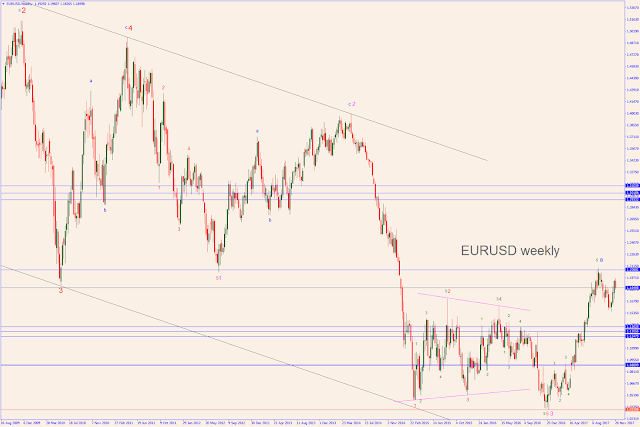 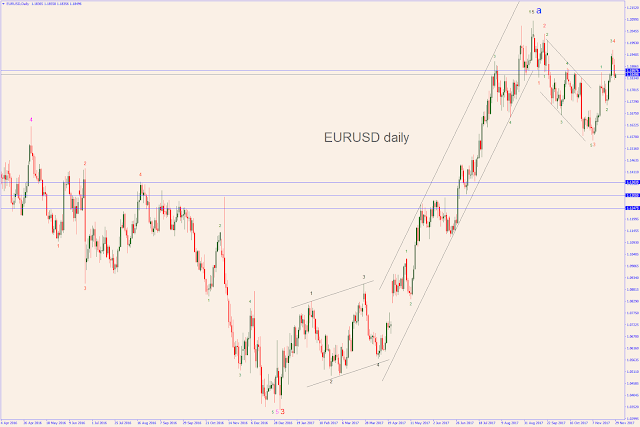 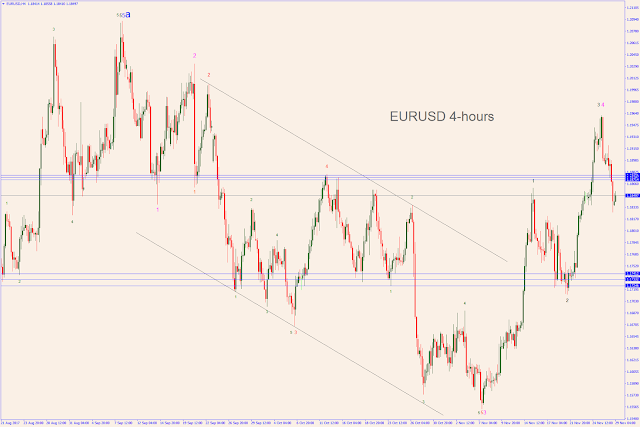 Posted by Mario D. Conti at 15:48 No comments:
Email ThisBlogThis!Share to TwitterShare to FacebookShare to Pinterest

WTI OIL CLOSE TO A TOP?

The monthly chart reveals that retracement wave 4 (in magenta) has already retraced 38.2% of wave 3. Within one-two months, it could top around the 61.3-61.8 area, although we shouldn't discard the higher cluster of blue lines at 66-69.15 (50% retracement).

The weekly chart doesn't add much information to the picture but the daily chart and the 4-hours chart draw out attention to the fact that, after point b, the OIL has fully deployed four waves up, plus a number of "extensions" of the "still unfolding" wave 5.

At present, this "extension pattern" suggests that OIL might bottom around 56.3 and launch the very last assault to the target at 61.3-61.8. However, if further extensions occur, OIL might reach the theoretical target at 66-69.15 in a much longer time.

Finally, the 1-hour chart displays the incoming target of this retracement wave at 56.31 (blue horizontal line)

NOTE the vertical lines on the weekly chart. WTI OIL took 99 weeks to develop wave 2 (in magenta). In case wave 4 takes the same amount of time, it would top around Dec 22. 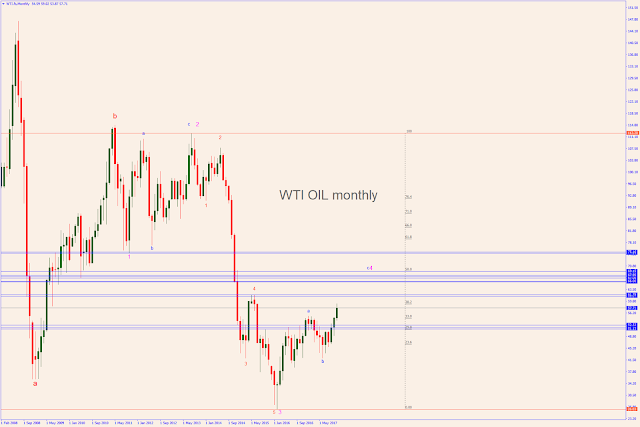 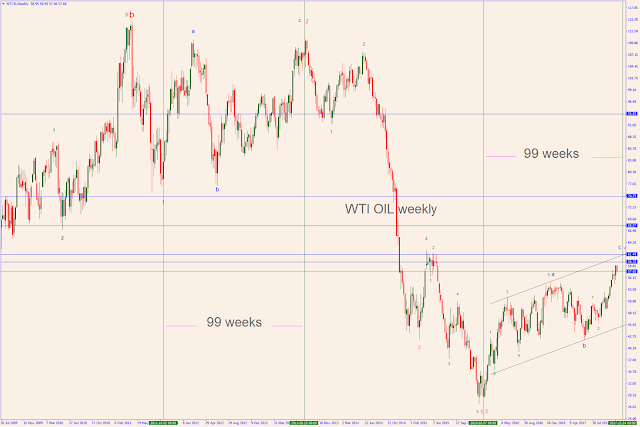 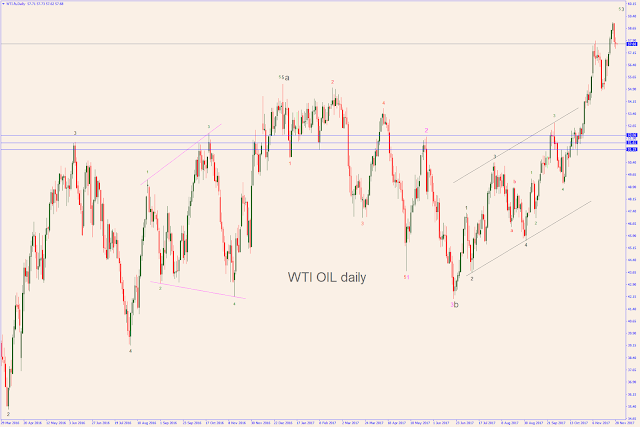 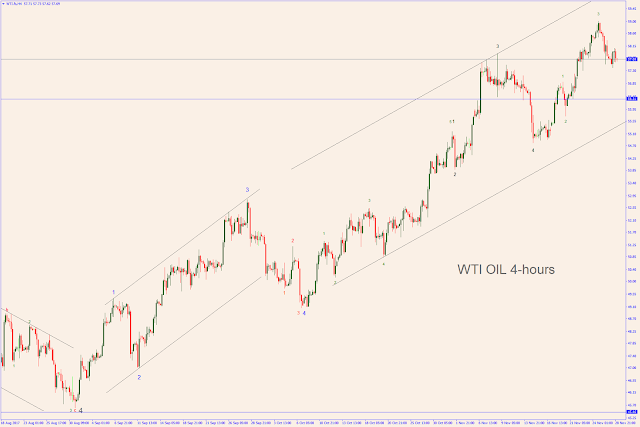 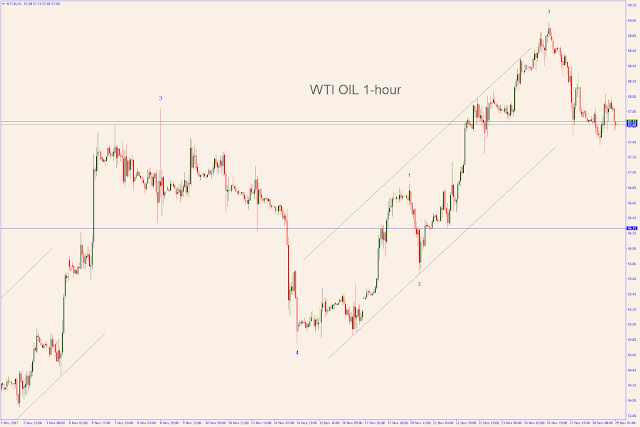